« Go back to News

On December 8, 2021, the National Award for Arts Association officially announced that the architectural award of the 22nd National Award for Arts was won by the landscape architect Kuo Chung-Twn, affirming that Kuo Chung-Twn upholds the professional conscience of protecting soil and water. The new wave of hydrophilic aesthetics. Aesthetically, it is adventurous in cross-border cooperation, and it is so varied that it cannot be classified as a typical one. Her courage has an inspiring positive force for the construction industry, and her respect for land and environment precedes design. It can call out people's sensitivity to the environment and has core guiding value. She is a pioneer in landscape architecture and a fighter who integrates landscape aesthetics into land ethics. She has driven a new wave of river activation and hydrophilic aesthetics in Taiwan, and has become a new model of cross-generational and cross-border integration in the field of contemporary Taiwanese landscape architecture.

Wang Chiu-Hwa and Kuo Chung-Twn, winners of the architecture category of the National Award for Arts for the second consecutive year, both advocated building buildings from built environments, and both practiced the architectural belief in harmony with the environment through the power of life. They opened up and improved the space creation under the concern of "environment". It also highlights the macro vision and professional attitude that contemporary Taiwanese architecture should have, and also demonstrates the key to the island's architecture based on the environment as a sustainable foundation.

All members of the society of Women in Architecture Taiwan congratulate Professor Kuo Chung-Twn, the co-founder of the Association, for receiving this national honor.

As an architectural practitioner, Kuo's work of water environment focused design was at the forefront of blurring the boundary of architectural design and environmental engineering when the Dong-Shan River Park was first completed in 1986. Her water-driven landscape and urban design projects drew nourishment from her studies of Japanese residential architecture and it's life-cycle and the relationship it has on a larger scale, with various scales of open or closed bodies of water in an urban or rural context.
Kuo Chung-Twn was born in Taipei in 1949 when her family relocated from Mainland China to Taiwan. Kuo received her Bachelor's degree in Architecture from Tamkang University in 1971. By 1974, Kuo completed Master of Engineering degree from Nihon University. For her doctoral study, Kuo went to Waseda University and studied under the guidance of Professor Yoshimasa Takamasa. In 1980, she delivered her doctoral dissertation on the research of the water environment, exploring the effects of various scales of water bodies on urban infrastructures and human habitation. At the time, such study by architects were unprecedented, as the field is considered as an environmental engineering specialty. Together with Hirogome Kenji and Wazuzi Watabe, the co-authors of "A study on water environment of Gujo Hachiman town: Part 1. Controlled water system: Urban planning",they received the prestigious thesis prize from the Architectural Institute of Japan of 1980.Unfortunately, Professor Yoshimasa Takamasa passed away before her doctoral thesis presentation, and due the structure of the course, she was unable to receive her degree without recommencing another study. At the time of such unfortunate event, Kuo was invited by Mayor Chen Ding-Nan to return to Taiwan, to commence work on a landscape project on Dongshan River in Yilan. This project was the first urban park project in Taiwan designed with a focus on the water environment and it's relationship with the users.
Kuo and her husband, Professor Horigome Kenji, founded Laboratory for Environment & Form (LEF) in 1992. The firm focuses on public projects, with special interest on environmental design. Kuo has developed her theoretical concept of environmental renovation toward design and planning. Her publications include Spatial Construction of Waterfront Place (1977), Streets Built by Chinese People (1980), Water Space of The Architecture (1981), and Asian Cities and Architecture (1986). Kuo has also actively participated in many environmental preservation movements. 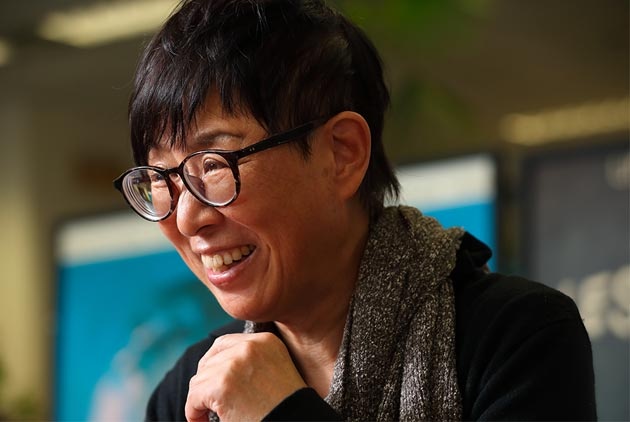