« Go back to Public Issues

If experimental education introduces innovation to resolve the burdens and flaws that have accumulated in institutional education, the ultimate goal would be to nurture children's creative thinking by learning from a diverse environment.

As British educator and author Kenneth Robinson explains, education should give the same importance to creativity as it does to literacy to equip children with sufficient competency to face an unpredictable future.

The cultivation of creativity is not limited to a particular type of space, yet the imagination is often stimulated when people step out of the traditional, rectangular boundaries of the classrooms and into the city's diverse spaces.

Devoted parent groups of non-institutional experimental education are all too eager to find alternative learning spaces.

For instance, they use residential apartments or public spaces, such as parks, cafes and restaurants, as the spatial setting for learning.

The truth is, the spatial choice remains quite limited.

However, another type of public space that is ideal for experimental education use is underutilized or unoccupied historical spaces in the city.

Take Hisnchu for instance: There are 19 idle public spaces of cultural and historical significance in the city, according to the General survey of Hsinchu City's Historic Buildings and Adaptive Reuse Research Plan conducted by Chung Yuan Christian University and commissioned in 2016 by the Hsinchu Bureau of Cultural Affairs.

Besides the ill-fated Pao-Chia dormitory building, which was demolished by a developer after a successful urban renewal bid, the remaining 18 buildings represent a variety of spatial types and historical values.

While some are as large as industrial oil refineries, others, such as the Nanmen Market, give a comprehensive representation of the lives of people in the past.

Furthermore, the likes of small-scale residences of the Japanese-style housing for military and police officers or the Central Weather Bureau's Hsinchu Station, which holds scientific significance, are all unoccupied.

From an architectural perspective, these spaces should be used for experimental learning, as the benefits would be immense.

By design, the dormitories from the Japanese colonial era pay particular attention to the scale of the human body and the relationship to the inner and outer environment, which would enable children to learn about the aesthetics, spatial and environmental relationships via experience.

Impressing children's minds not only with the historical instruction of their adult teachers, but also learning by experience, might have far-reaching effects on their creative energies.

Similarly, science classes could take place at the old weather station, while the the Sixth Japanese Naval Fuel Industrial Area could serve as a learning ground for ecology and industrial urban development.

These spaces provide far more effective learning material for children than the texts and pictures in textbooks, and are bound to make a lasting impression if experienced.

As Hsinchu boasts the nation's highest birth rate and the lowest average age, the city government should take a more ambitious stance on incorporating experimental education into the rejuvenation of public cultural and historical spaces.

The profit-driven practices of the past, such as build-operate-transfer development projects, ought not be the only answer for these yet-to-be-rejuvenated spaces of historic significance.

Jenny Peng Chu-tzu is an architect registered in Queensland, Australia, and a member of Women in Architecture, Taiwan. 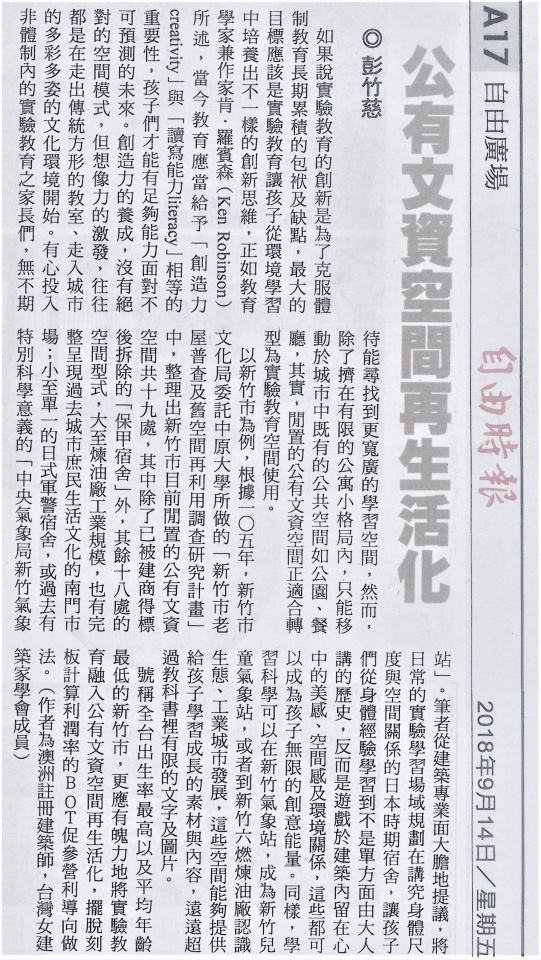